1.2 Welcome to the digital age

The digital age is everywhere, it’s growing, and it’s changing what is possible for researchers.

The central premise of this book is that the digital age creates new opportunities for social research. Researchers can now observe behavior, ask questions, run experiments, and collaborate in ways that were simply impossible in the recent past. Along with these new opportunities come new risks: researchers can now harm people in ways that were impossible in the recent past. The source of these opportunities and risks is the transition from the analog age to the digital age. This transition has not happened all at once—like a light switch turning on—and, in fact, it is not yet complete. However, we’ve seen enough by now to know that something big is going on.

One way to notice this transition is to look for changes in your daily life. Many things in your life that used to be analog are now digital. Maybe you used to use a camera with film, but now you use a digital camera (which is probably part of your smart phone). Maybe you used to read a physical newspaper, but now you read an online newspaper. Maybe you used to pay for things with cash, but now you pay with a credit card. In each case, the change from analog to digital means that more data about you are being captured and stored digitally.

In fact, when looked at in aggregate, the effects of the transition are astonishing. The amount of information in the world is rapidly increasing, and more of that information is stored digitally, which facilitates analysis, transmission, and merging (figure 1.1). All of this digital information has come to be called “big data.” In addition to this explosion of digital data, there is a parallel growth in access to computing power (figure 1.1). These trends—increasing amounts of digital data and increasing availability of computing—are likely to continue for the foreseeable future. 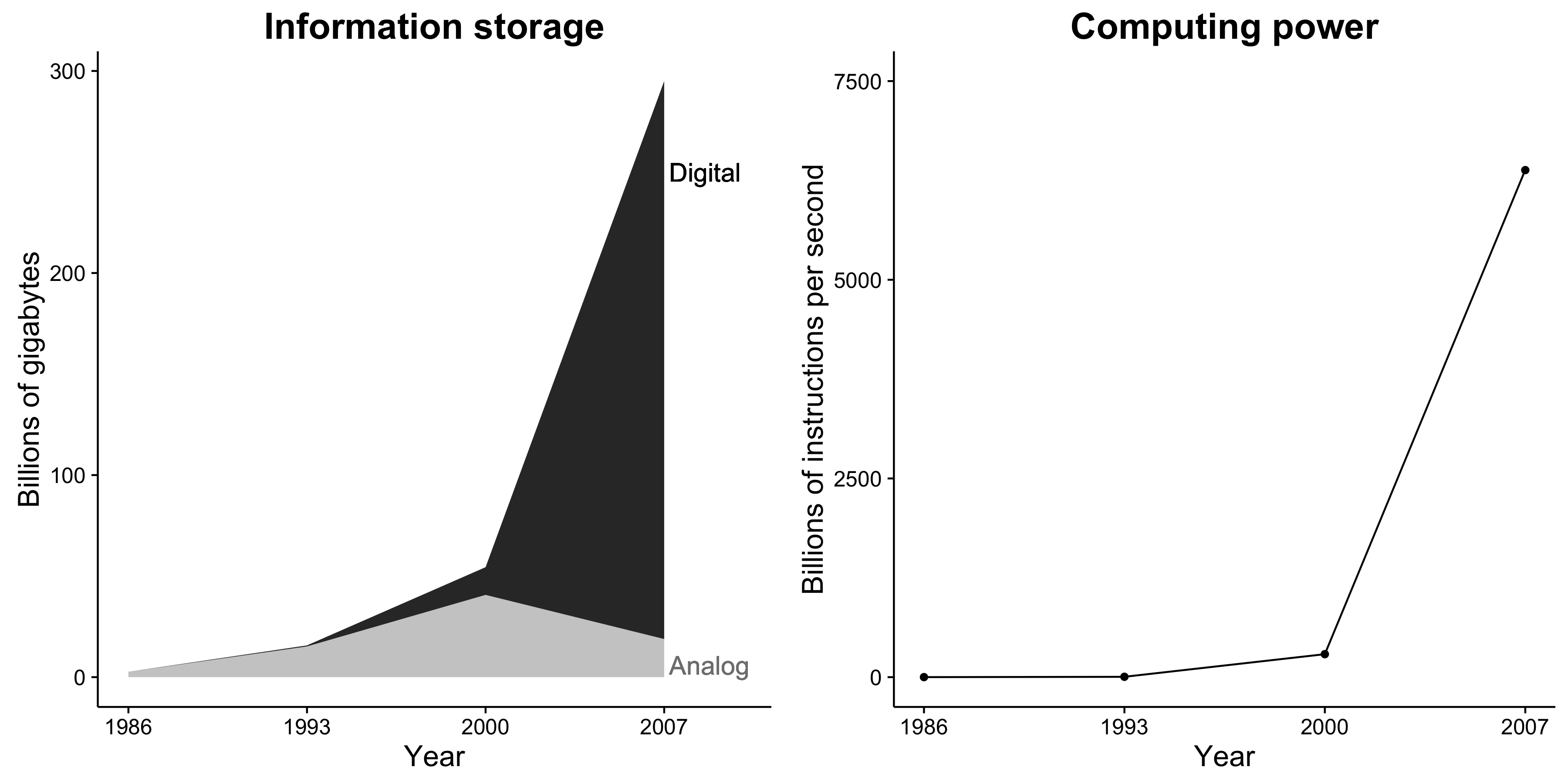 For the purposes of social research, I think the most important feature of the digital age is computers everywhere. Beginning as room-sized machines that were available only to governments and big companies, computers have been shrinking in size and increasing in ubiquity. Each decade since the 1980s has seen a new kind of computing emerge: personal computers, laptops, smart phones, and now embedded processors in the “Internet of Things” (i.e., computers inside of devices such as cars, watches, and thermostats) (Waldrop 2016). Increasingly, these ubiquitous computers do more than just calculate; they also sense, store, and transmit information.

For researchers, the implications of the presence of computers everywhere are easiest to see online, an environment that is fully measured and amenable to experimentation. For example, an online store can easily collect incredibly precise data about the shopping patterns of millions of customers. Further, it can easily randomize groups of customers to receive different shopping experiences. This ability to randomize on top of tracking means that online stores can constantly run randomized controlled experiments. In fact, if you’ve ever bought anything from an online store, your behavior has been tracked and you’ve almost certainly been a participant in an experiment, whether you knew it or not.

This fully measured, fully randomizable world is not just happening online; it is increasingly happening everywhere. Physical stores already collect extremely detailed purchase data, and they are developing infrastructure to monitor customers’ shopping behavior and mix experimentation into routine business practice. The “Internet of Things” means that behavior in the physical world will be increasingly captured by digital sensors. In other words, when you think about social research in the digital age you should not just think online, you should think everywhere.

In addition to enabling the measurement of behavior and randomization of treatments, the digital age has also created new ways for people to communicate. These new forms of communication allow researchers to run innovative surveys and to create mass collaboration with their colleagues and the general public.

A skeptic might point out that none of these capabilities are really new. That is, in the past, there have been other major advances in people’s abilities to communicate (e.g., the telegraph (Gleick 2011)), and computers have been getting faster at roughly the same rate since the 1960s (Waldrop 2016). But what this skeptic is missing is that at a certain point more of the same becomes something different. Here’s an analogy that I like (Halevy, Norvig, and Pereira 2009; Mayer-Schönberger and Cukier 2013). If you can capture an image of a horse, then you have a photograph. And, if you can capture 24 images of a horse per second, then you have a movie. Of course, a movie is just a bunch of photos, but only a extreme skeptic would claim that photos and movies are the same.

Researchers are in the process of making a change akin to the transition from photography to cinematography. This change, however, does not mean that everything we have learned in the past should be ignored. Just as the principles of photography inform those of cinematography, the principles of social research that have been developed over the past 100 years will inform the social research taking place over the next 100 years. But, the change also means that we should not just keep doing the same thing. Rather, we must combine the approaches of the past with the capabilities of the present and future. For example, the research of Joshua Blumenstock and colleagues was a mixture of traditional survey research with what some might call data science. Both of these ingredients were necessary: neither the survey responses nor the call records by themselves were enough to produce high-resolution estimates of poverty. More generally, social researchers will need to combine ideas from social science and data science in order to take advantage of the opportunities of the digital age; neither approach alone will be enough.