In the real world, however, the conditions underlying these mathematical results are rarely met. For example, there are often coverage errors and nonresponse. Because of these problems, researchers often have to employ a variety of statistical adjustments in order to make inference from their sample to their target population. Thus, it is important to distinguish between probability sampling in theory, which has strong theoretical guarantees, and probability sampling in practice, which offers no such guarantees and depends on a variety of statistical adjustments.

Over time, the differences between probability sampling in theory and probability sampling in practice have been increasing. For example, nonresponse rates have been steadily increasing, even in high-quality, expensive surveys (figure 3.5) (National Research Council 2013; B. D. Meyer, Mok, and Sullivan 2015). Nonresponse rates are much higher in commercial telephone surveys—sometimes even as high as 90% (Kohut et al. 2012). These increases in nonresponse threaten the quality of estimates because the estimates increasingly depend on the statistical models that researchers use to adjust for nonresponse. Further, these decreases in quality have happened despite increasingly expensive efforts by survey researchers to maintain high response rates. Some people fear that these twin trends of decreasing quality and increasing cost threaten the foundation of survey research (National Research Council 2013). 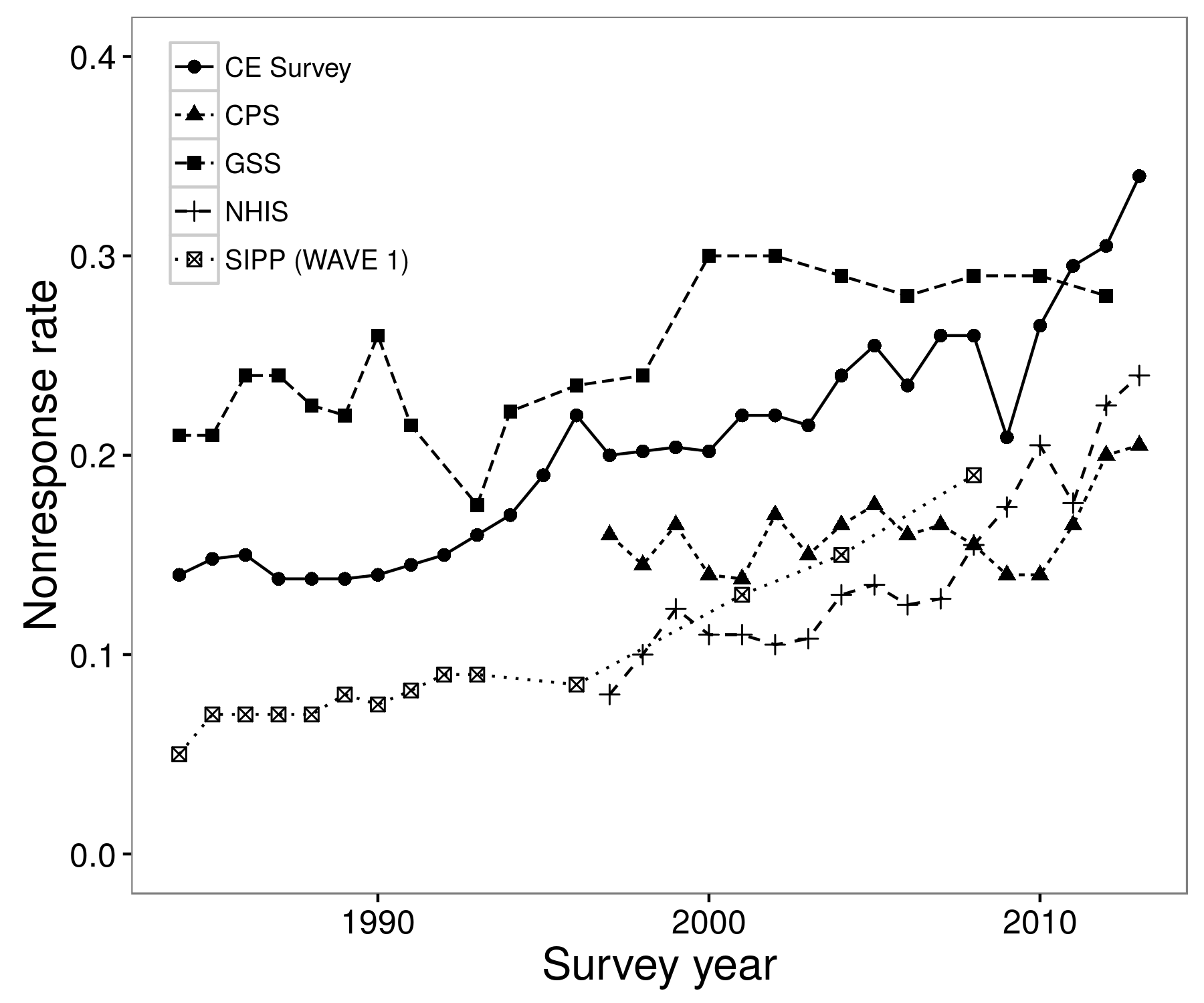 Figure 3.5: Nonresponse has been increasingly steadily, even in high-quality expensive surveys (National Research Council 2013; B. D. Meyer, Mok, and Sullivan 2015). Nonresponse rates are much higher for commercial telephones surveys, sometimes even as high as 90% (Kohut et al. 2012). These long-term trends in nonresponse mean that data collection is more expensive and estimates are less reliable. Adapted from B. D. Meyer, Mok, and Sullivan (2015), figure 1. 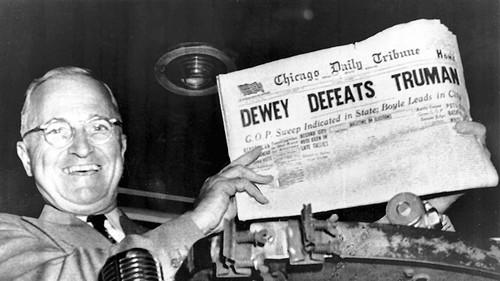 Figure 3.6: President Harry Truman holding up the headline of a newspaper that had incorrectly announced his defeat. This headline was based in part on estimates from non-probability samples (Mosteller 1949; Bean 1950; Freedman, Pisani, and Purves 2007). Although “Dewey Defeats Truman” happened in 1948, it is still among the reason that some researchers are skeptical about estimates from non-probability samples. Source: Harry S. Truman Library & Museum.

One form of non-probability sampling that is particular suited to the digital age is the use of online panels. Researchers using online panels depend on some panel provider—usually a company, government, or university—to construct a large, diverse group of people who agree to serve as respondents for surveys. These panel participants are often recruited using a variety of ad hoc methods such as online banner ads. Then, a researcher can pay the panel provider for access to a sample of respondents with desired characteristics (e.g., nationally representative of adults). These online panels are non-probability methods because not everyone has a known, nonzero probability of inclusion. Although non-probability online panels are already being used by social researchers (e.g., the CCES), there is still some debate about the quality of estimates that come from them (Callegaro et al. 2014).

As I said earlier, non-probability samples are viewed with great skepticism by many social researchers, in part because of their role in some of the most embarrassing failures in the early days of survey research. A clear example of how far we have come with non-probability samples is the research by Wei Wang, David Rothschild, Sharad Goel, and Andrew Gelman (2015) that correctly recovered the outcome of the 2012 US election using a non-probability sample of American Xbox users—a decidedly nonrandom sample of Americans. The researchers recruited respondents from the XBox gaming system, and as you might expect, the Xbox sample skewed male and skewed young: 18- to 29-year-olds make up 19% of the electorate but 65% of the Xbox sample, and men make up 47% of the electorate but 93% of the Xbox sample (figure 3.7). Because of these strong demographic biases, the raw Xbox data was a poor indicator of election returns. It predicted a strong victory for Mitt Romney over Barack Obama. Again, this is another example of the dangers of raw, unadjusted non-probability samples and is reminiscent of the Literary Digest fiasco. 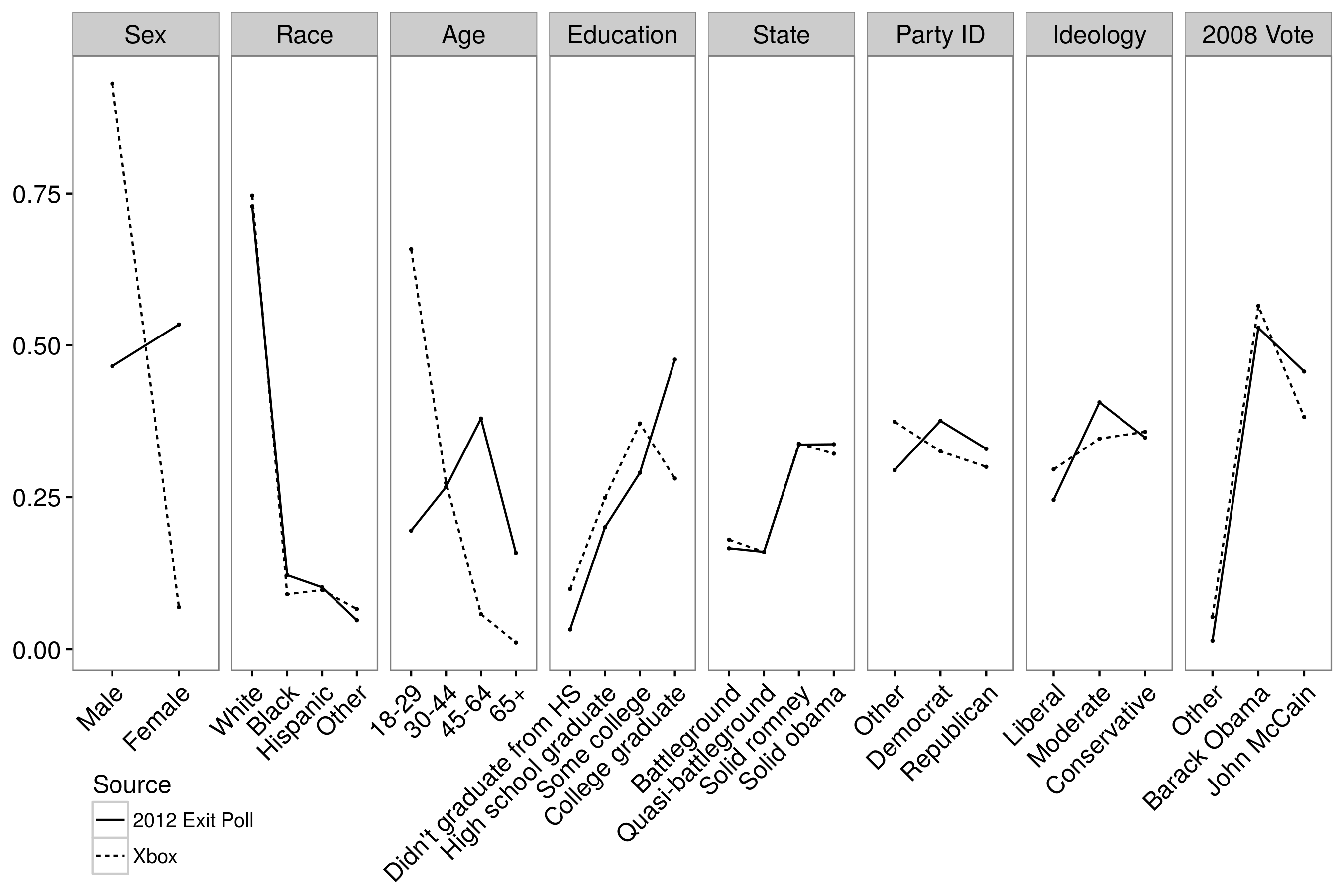 However, Wang and colleagues were aware of these problems and attempted to adjust for their non-random sampling process when making estimates. In particular, they used post-stratification, a technique that is also widely used to adjust probability samples that have coverage errors and non-response.

The main idea of post-stratification is to use auxiliary information about the target population to help improve the estimate that comes from a sample. When using post-stratification to make estimates from their non-probability sample, Wang and colleague chopped the population into different groups, estimated the support for Obama in each group, and then took a weighted average of the group estimates to produce an overall estimate. For example, they could have split the population into two groups (men and women), estimated the support for Obama among men and women, and then estimated overall support for Obama by taking a weighted average in order to account for the fact that women make up 53% of the electorate and men 47%. Roughly, post-stratification helps correct for an imbalanced sample by bringing in auxiliary information about the sizes of the groups.

Of course, it seems unlikely that the response propensities will be the same for all men and all women. However, the homogeneous-response-propensities-within-groups assumption becomes more plausible as the number of groups increases. Roughly, it becomes easier to chop the population into homogeneous groups if you create more groups. For example, it might seem implausible that all women have the same response propensity, but it might seem more plausible that there is the same response propensity for all women who are aged 18-29, who graduated from college, and who are living in California. Thus, as the number of groups used in post-stratification gets larger, the assumptions needed to support the method become more reasonable. Given this fact, researchers often want to create a huge number of groups for post-stratification. However, as the number of groups increases, researchers run into a different problem: data sparsity. If there are only a small number of people in each group, then the estimates will be more uncertain, and in the extreme case where there is a group that has no respondents, then post-stratification completely breaks down.

There are two ways out of this inherent tension between the plausibility of the homogeneous-response-propensity-within-groups assumption and the demand for reasonable sample sizes in each group. First, researchers can collect a larger, more diverse sample, which helps ensure reasonable sample sizes in each group. Second, they can use a more sophisticated statistical model for making estimates within groups. And, in fact, sometimes researchers do both, as Wang and colleagues did with their study of the election using respondents from Xbox.

Even with 345,858 unique participants, however, there were still many, many groups for which Wang and colleagues had almost no respondents. Therefore, they used a technique called multilevel regression to estimate the support in each group. Essentially, to estimate the support for Obama within a specific group, the multilevel regression pooled information from many closely related groups. For example, imagine trying to estimate the support for Obama among female Hispanics between 18 and 29 years old, who are college graduates, who are registered Democrats, who self-identify as moderates, and who voted for Obama in 2008. This is a very, very specific group, and it is possible that there is nobody in the sample with these characteristics. Therefore, to make estimates about this group, multilevel regression uses a statistical model to pool together estimates from people in very similar groups.

Thus, Wang and colleagues used an approach that combined multilevel regression and post-stratification, so they called their strategy multilevel regression with post-stratification or, more affectionately, “Mr. P.” When Wang and colleagues used Mr. P. to make estimates from the XBox non-probability sample, they produced estimates very close to the overall support that Obama received in the 2012 election (figure 3.8). In fact their estimates were more accurate than an aggregate of traditional public opinion polls. Thus, in this case, statistical adjustments—specifically Mr. P.—seem to do a good job correcting the biases in non-probability data; biases that were clearly visible when you look at the estimates from the unadjusted Xbox data. 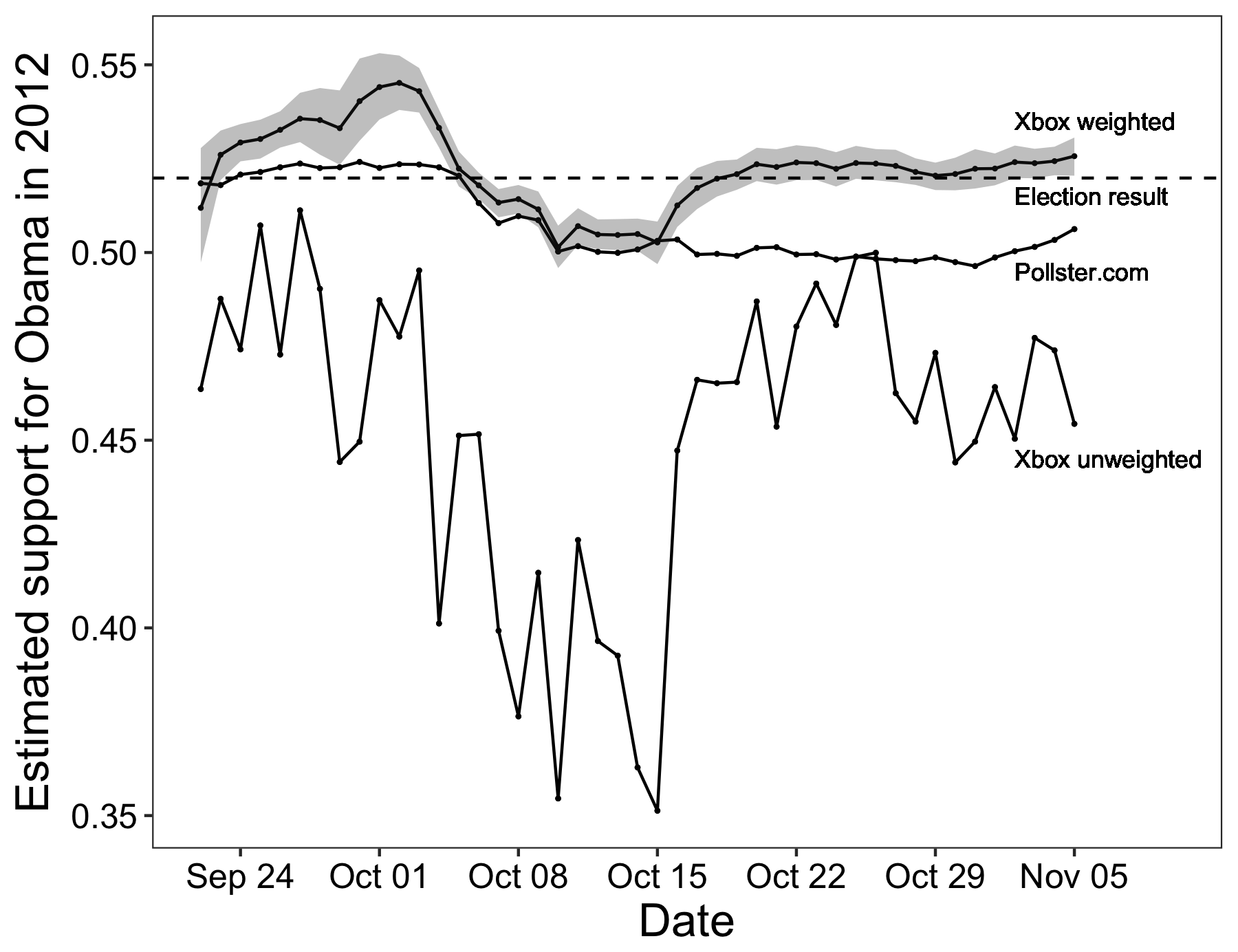