Researchers who are new to experiments often focus on a very specific, narrow question: does this treatment “work”? For example, does a phone call from a volunteer encourage someone to vote? Does changing a website button from blue to green increase click-through rate? Unfortunately, loose phrasing about what “works” obscures the fact that narrowly focused experiments don’t really tell you whether a treatment “works” in a general sense. Rather, narrowly focused experiments answer a much more specific question: what is the average effect of this specific treatment with this specific implementation for this population of participants at this time? I’ll call experiments that focus on this narrow question simple experiments.

Simple experiments can provide valuable information, but they fail to answer many questions that are both important and interesting such as: are there some people for whom the treatment had a larger or smaller effect?; is there another treatment that would be more effective?; and how does this experiment relate to broader social theories?

Figure 4.3: Schematic of design from Schultz et al. (2007). The field experiment involved visiting about 300 households in San Marcos, California five times over an eight week period. On each visit the researchers manually took a reading from the house’s power meter. On two of the visits the researchers placed doorhangers on the house providing some information about their energy usage. The research question was how the content of these messages would impact energy use.

The experiment had two conditions. In the first condition, households received general energy saving tips (e.g., use fans instead of air conditioners) and information about their household’s energy usage compared to the average of the energy usage in their neighborhood. Schultz and colleagues called this the descriptive normative condition because the information about the energy use in their neighborhood provided information about typical behavior (i.e., a descriptive norm). When Schultz and colleagues looked at the resulting energy usage in this group, the treatment appeared to have no effect, either in the short-term or the long-term; in other words, the treatment didn’t seem to “work” (Figure 4.4).

But, fortunately, Schultz et al. (2007) did not settle for this simplistic analysis. Before the experiment began they reasoned that heavy users of electricity—people above the mean—might reduce their consumption, and that light users of electricity—people below the mean—might actually increase their consumption. When they looked at the data, that’s exactly what they found (Figure 4.4). Thus, what looked like a treatment that was having no effect was actually a treatment that had two offsetting effects. The researchers called this counter-productive increase among the light users a boomerang effect.

Further, Schultz and colleagues anticipated this possibility, and in the second condition they deployed a slightly different treatment, one explicitly designed to eliminate the boomerang effect. The households in the second condition received the exact same treatment—general energy saving tips and information about their household’s energy usage compared to the their neighborhood—with one tiny addition: for people with below-average consumption, the researchers added a :) and for people with above-average consumption they added a :(. These emoticons were designed to trigger what the researchers called injunctive norms. Injunctive norms refer to perceptions of what is commonly approved (and disapproved) whereas descriptive norms refer to perceptions of what is commonly done (Reno, Cialdini, and Kallgren 1993).

By adding this one tiny emoticon, the researchers dramatically reduced the boomerang effect (Figure 4.4). Thus, by making this one simple change—a change that was motivated by an abstract social psychological theory (Cialdini, Kallgren, and Reno 1991)—the researchers were able to turn a program from one that didn’t seem to work into one that worked, and, simultaneously, they were able to contribute to the general understanding of how social norms affect human behavior. 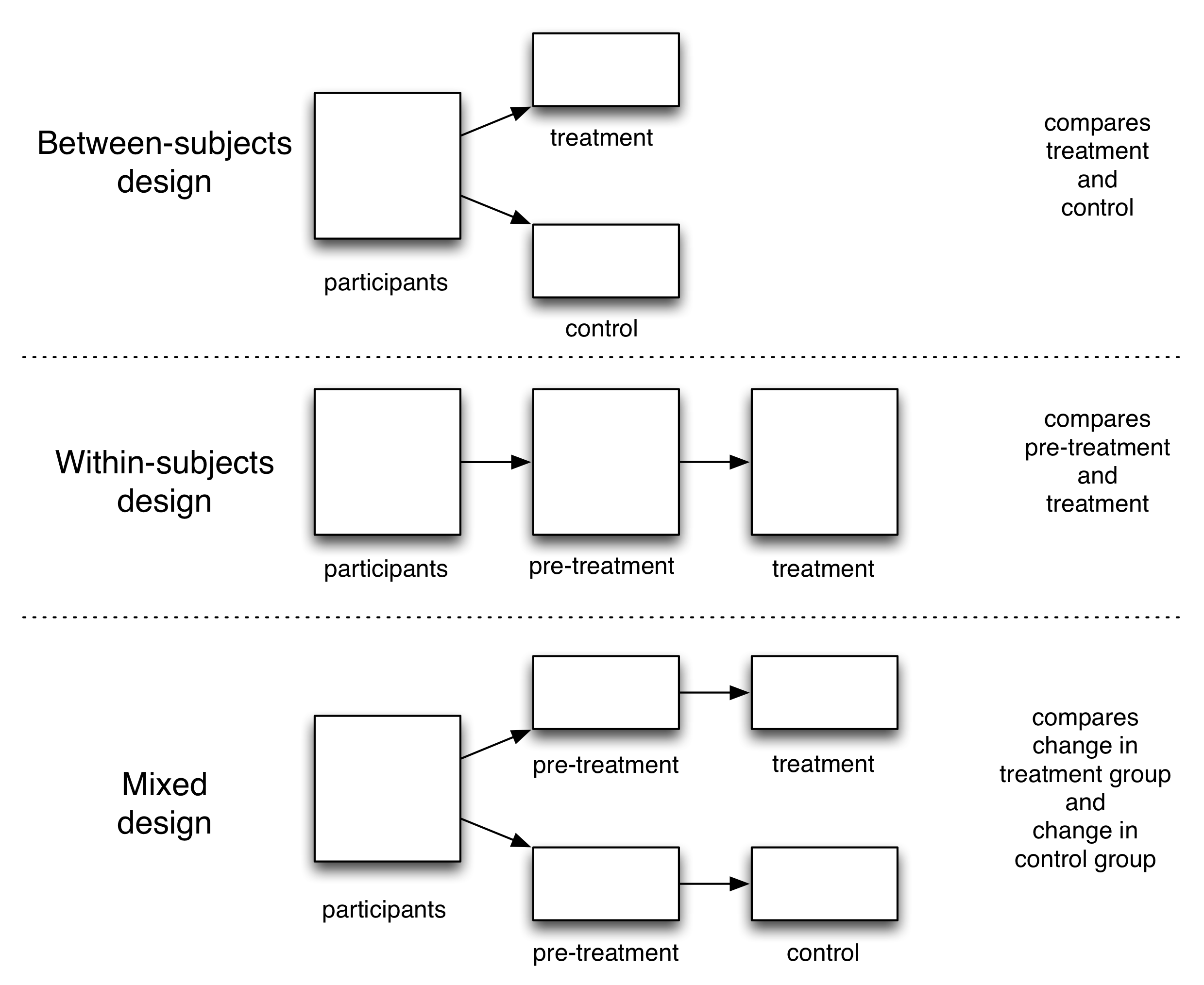 Overall, the design and results of Schultz et al. (2007) show the value of moving beyond simple experiments. Fortunately, you don’t need to be a genius to create experiments like this. Social scientists have developed three concepts that will guide you toward richer and more creative experiments: 1) validity, 2) heterogeneity of treatment effects, and 3) mechanisms. That is, if you keep these three ideas in mind while you are designing your experiment, you will naturally create more interesting and useful experiments. In order to illustrate these three concepts in action, I’ll describe a number of follow-up partially digital field experiments that built on the elegant design and exciting results in Schultz et al. (2007). As you will see, through more careful design, implementation, analysis, and interpretation, you too can move beyond simple experiments.