Social research in the digital age will involve Readymades, Custommades, and powerful hybrids.

One of the most famous urinals ever was purchased in 1917, and that urinal is, in some ways, similar to lots of social research in the digital age. The urinal in question was purchased by the French artist Marcel Duchamp. After purchasing it, Duchamp scribbled “R. Mutt 1917” on it and then named his creation Fountain (Figure 1.2). Although its initial reception for was lukewarm, Fountain has come to considered one of the most important pieces of modern art because it fundamentally changed how people think about art (Higgins 2004). Fountain is an example of a Readymade, where an artist sees something that already exists in the world then repurposes it as art. 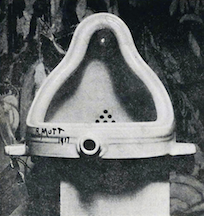 Figure 1.2: Fountain by Marcel Duchamp. Fountain is an example of a Readymade, where an artist sees something that already exists in the world then creatively repurposes it for art. So far, a lot of social research in the digital age has involved repurposing data that created for some purpose other than research. Photo by Alfred Stiglitz, 1917. Source: Wikimedia Commons.

However, just as most artists don’t walk around looking for Readymades, most social researchers in the past have not walked around looking for data that can be repurposed. Instead, rather than being data-driven, most successful social research in the past has been question-driven. That is, a researcher had a question and then found or created the data needed to answer that question. An artist who illustrates this other style of work is Michelangelo. He wanted to make a statue of David so he spent 3 years laboring with a block of marble to create his masterpiece (Figure 1.3). David is not a Readymade; it is a Custommade.

Figure 1.3: David by Michaelangelo. David is an example of art that was intentionally created; it is a Custommade. This style contrasts with Readymades such as Fountain (Figure 1.2). Social research in the digital age will involve both Readymades and Custommades. Photo by Jörg Bittner Unna, 2008. Source: Wikimedia Commons.

Social research in the digital age will involve both Duchamps and Michelangelos, both Readymades and Custommades. This book will explore these two approaches, and, more importantly, it will show how they can be combined into a powerful hybrid. For example, Joshua Blumenstock and colleagues were part Duchamp and part Michelangelo; they repurposed the mobile phone call data (a Readymade) and they created their own survey data (a Custommade). This blending of Readymades and Custommades is a pattern that you’ll see throughout this book.